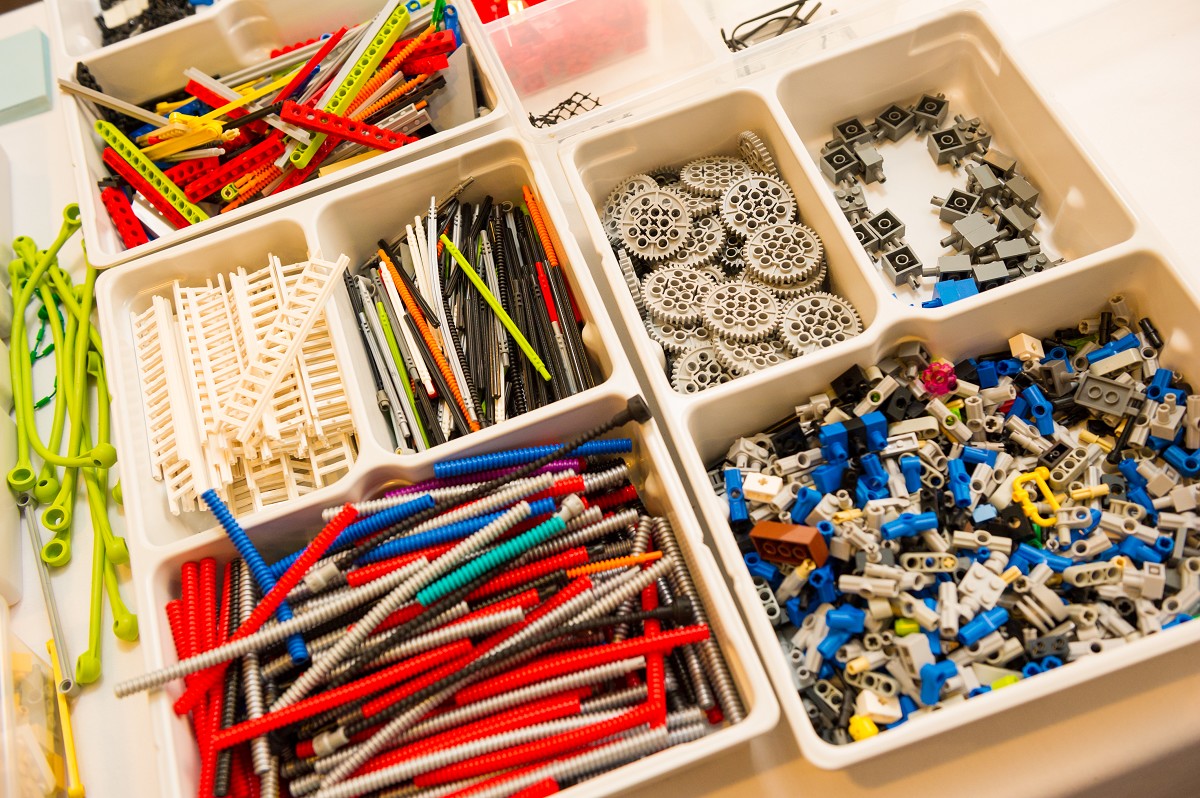 We’d like to provide you with some ideas on ways to use LEGO® to relax, find balance, and be happier.

If you are a Certified LEGO® SERIOUS PLAY® methods facilitator, there’s a good chance you have and lots of LEGO.  If you are just starting out, you are probably planning all the ways you will build your collection. Having a large collection of LEGO is important, as is storing and organizing it so you can find the LEGO you need and be ready to facilitate events both large and small.

At Strategic Play, we have gone through many variations of storing and sorting our LEGO bricks.

In the early years, LEGO insisted we purchase new bricks for each client that we worked with in a  workshop. Working under contract, we were compelled to leave the bricks with the client so they could use the LEGO to continue conversations after the workshop. On the one hand, this was great. After a session, we would just leave the bricks on the table and walk out the door with a few Post-it Notes.

We quickly realized this theory the team would continue to build and discuss was unlikely to happen.  After running a strategy session for a senior management team at a regional hospital, one of the doctors called and asked if I was coming back to pick up the LEGO?  They had nowhere to store it and they were too busy to use it. Without me there to facilitate the conversations, people did not feel they had the ability to manage the time effectively. At the end of the day, this team donated the bricks to the pediatrics department. I could not help thinking that while this was great  for the kids, it was a missed opportunity.

Then came the open source model and, with it, the idea to reuse the bricks. Yay! This opened up a whole new world. For clients, the cost of the workshops became much more reasonable.   However, with this gift came the challenge:  How do we manage the bricks after using them?

We started by organizing the bricks back into their original sets: Starter kits, exploration kits, landscape kits, and connector kits. This was exhausting. Not only was it hard work, but it was impossible to maintain a perfect set.  We realized this was way too much work, and as my co-facilitator Stephen Walling  so eloquently put it, “The squeeze ain’t worth the juice.”

We then began to create our own kits, comprised of loose bricks that would amount to one small container with one Minifigure each. This small container was in fact about the size of a Starter Kit, but the bricks in each kit would be different. We created many of these using a large collection of pieces from Starter Kits. But more often, we would also mix in pieces from the Landscape Kits. Then we saw people were busy looking at each other’s kits and complaining they were not the same. The element of fairness came into play; and yes, it created issues.

We now begin all sessions with a brand new Exploration Bag.  We let people open the bags themselves and then we collect the packaging. We use the small collection of bricks to facilitate the skill building part of the session.  After the first 30 – 45 minutes, we hand out small Ziploc bags and let people put these bricks away. We usually give these  bricks  to the participants as a transitional object, meaning they take the bricks back  to the office to build on  their desk. This is a great way for them to remember the session.  The joy they feel receiving this small gift is well worth the cost. Then we move on to using larger containers of pre-enjoyed LEGO.

We start with new bricks where all the bricks are the same, and then transition to larger mixed-up kits. These large kits are large boxes, one for each table. They are mostly mixed-up pieces from Starter Kits. We remind people to use hand sterilizer before and after building. If anyone asks if they can use the bricks from another table, we encourage them to politely ask the other team or table group if they have a certain brick they are willing  to trade. No stealing is allowed as we play well together.

This process makes setting up and cleaning up simple, easy, and stressless. The participants are happy because they each got a new bag of bricks to open and everyone had the same bricks. Not only does this meet their needs for fairness,  but they received an unexpected gift to keep.  But also, and this is so very important, you are happy because you don’t have the overwhelming job of hours of sorting LEGO bricks!

Do you have any simple ways to  make life facilitating with Lego more fun or relaxing?

Please share them with us because we are always looking for fresh ideas.